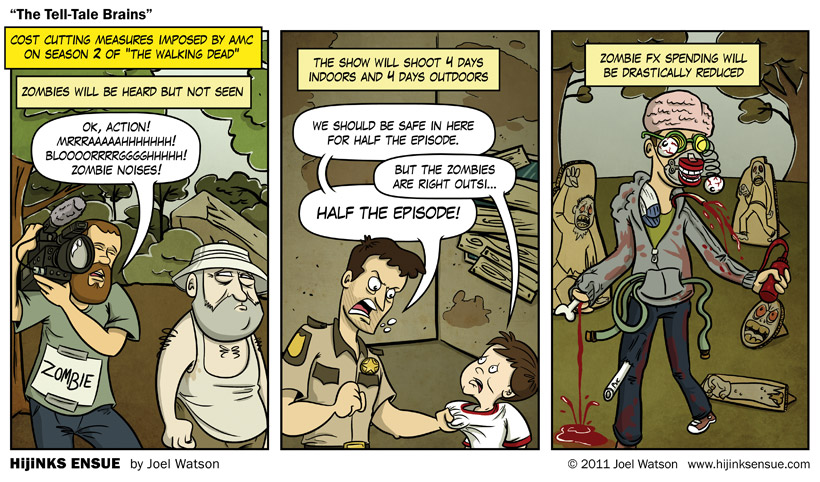 What’s that in the distance? Why, it’s the faint siren song of the undead. Hearing them is SO much scarier than seeing them. I can only image their desiccated corpses, somehow animated by a perversion of biology, their skin sloughed off to reveal muscle and bone, their entrails spilling out of their gaping abdominal cavities, their… oh, you get the picture. No need to see any of that. Let’s go inside for a long time and talk about how there are probably zombies all over the place.

All of the news about what AMC is doing to The Walking Dead (firing Frank Darabont, requiring 13 episodes for less money than they had to make 6 last season, threatening the cast and crew to keep quiet) sounds BAD. Like REALLY really bad. Why can’y hollywood just pet the pretty rabbit? Why do they have to crush its tiny rabbit skull every time?

COMMENTERS: How else are AMC going to cut costs on The Walking Dead? 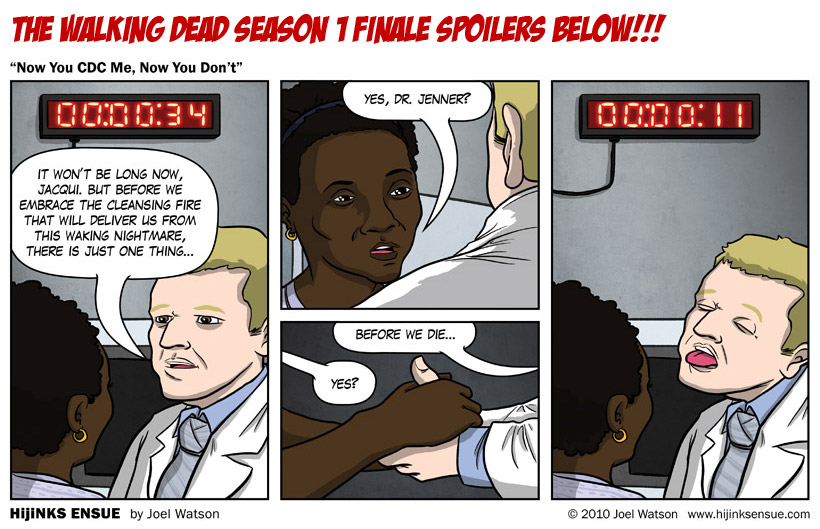 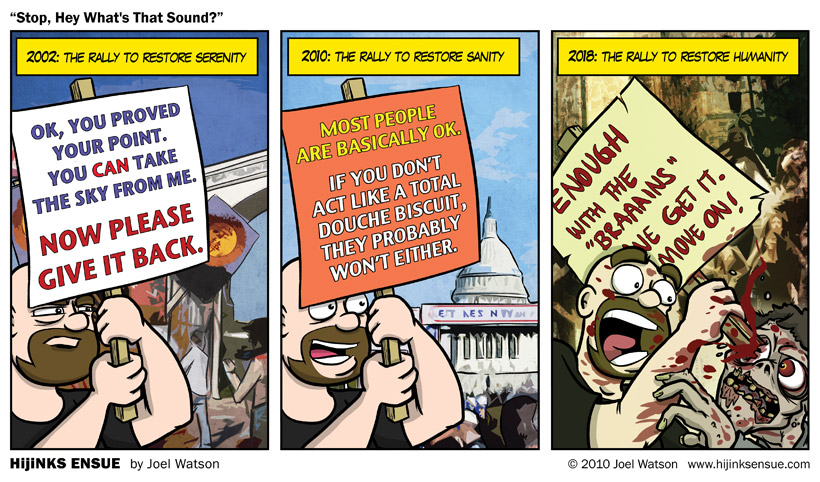 “There is a key issue that we do not see eye to eye on and on this issue I refuse to back down. That is the issue of your brains and my desire to eat them because they are delicious and also BRAAAAAAAINS!”

David went to the Rally To Restore Sanity and/or Fear and took some pictures. Also, AMC’s The Walking Dead was great. In one episode they have already got me empathizing with and caring for the characters that will soon be horribly torn to fleshy shreds by legions of the undead. I don’t want to give ANYTHING away but there was one little dialog detail that paid off in an unexpected way that really showcased the writer’s attention to detail and character development. If they can maintain that level of quality coupled with the every three to five minutes or so zombie headshot ratio, I think we have a real winner on our hands.

I expect we will be talking about The Walking Dead quite a bit on the next HE Podcast.

SPEAKING OF THE PODCAST…
The HijiNKS ENSUE PODCAST IS BACK, but I need your help to keep it alive. The goal is to get 300 monthly donation subscribers by the end of the year. Read more HERE if you enjoy the Podcast and want to help.

UPDATE: The more Sanity Rally pics I see the more I think Josh was actually there.

Check out Eli and Denise’s photos of their zombie hunter Halloween alter egos.

COMMENTERS: Did you go to the Rally To Restore Sanity And/Or Fear? Do you have any pics or stories to share? Did you watch The Walking Dead? What did you think? Do you want to remix Josh’s signs and post the results in the comments? Go for it!