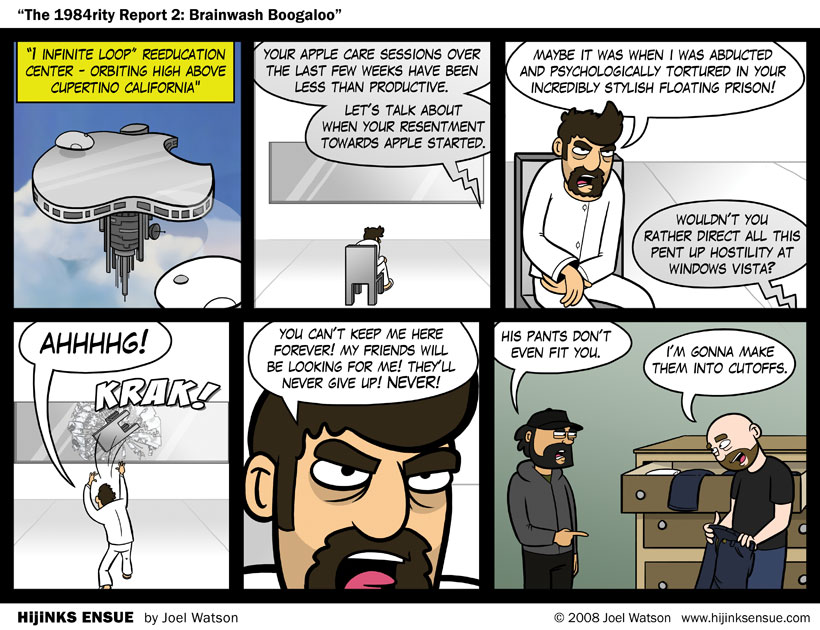 It’s a veritable infestation of continuity. Is there an aerosol spray that will kill it?

Josh brought his new Macbook Pro over the for the Podcast last night. It was sexy. The End. 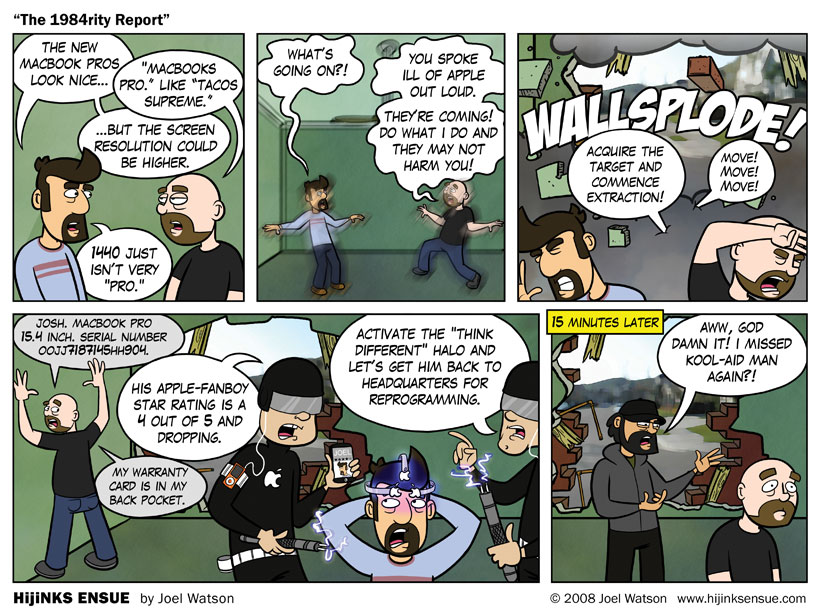 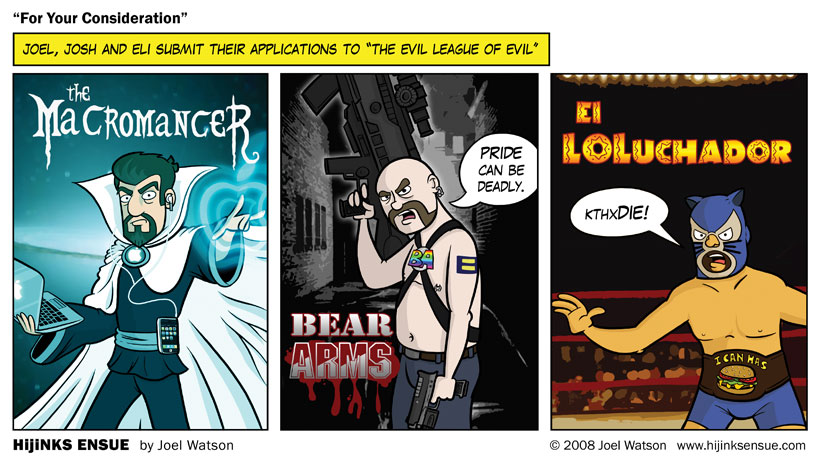 Inspired by Tindomiel and the other FB’s that created THIS AMAZINGLY AWESOME VIDEO (read the story and watch it NOW!), I’ve decided the HE crew should formally apply to The Evil League of Evil. Here’s hoping we’ve made the Bad Horse gleeful.

Feel free to use the comments to fill in the 3 arch villains backstories, powers, sidekicks, nemesis… nemesies… you get the idea. 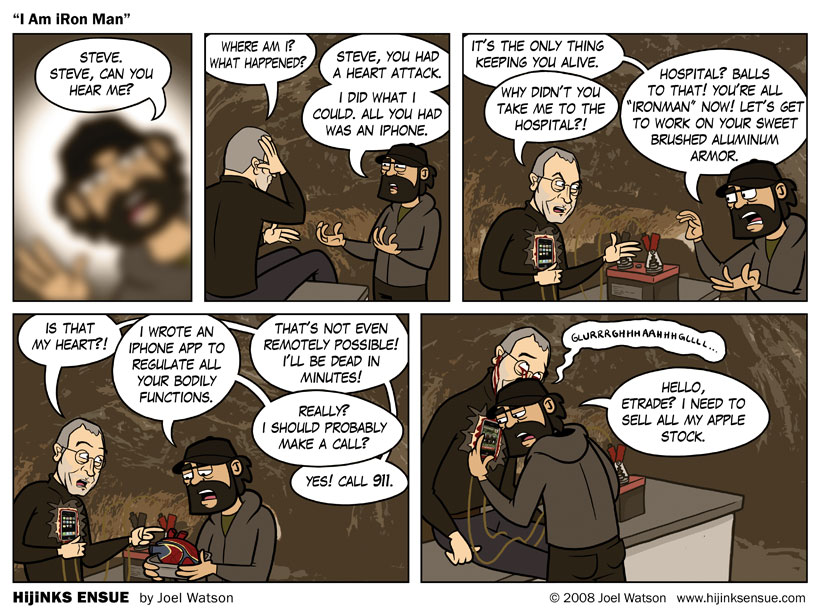 HOLY CRAP, STEVE JOBS HAD A HEART ATTACK (except not at all)!

Turns out it may have been an attempt to sabotage Apple’s stock (AAPL) prices. The perpetrator is potentially facing prison time. So if CNN picks up this comic and thinks it’s real, am I going to Federal Pound You In The Ass Prison (FPYITAP)?

In other Apple news, there’s been a rumor of a new Apple product called “The Brick” netting around the trons for a few weeks. Now it looks like “brick” may refer to a brick of solid billet aluminum, out of which the new Macbooks and Macbooks Pro will be machined out of using water jets and lasers. Sounds cool and all, but nothing earth shattering.

Assuming Eli and Steve did get to work on an iRon Man suit, I imagine it would have no visible seems, be incredibly light, have sub par battery life, radiate at about 10,000 degrees Fahrenheit and provide absolutely no protection against machine guns or tank shells. I can also assure you it would be beautiful and Eli would be fired about 3 months into the process for “not getting the vision!”

I suppose I should also mention that Iron Man is the best selling Blu Ray of all time. So many people bought it, in fact, that they shut down Sony’s BD-Live servers. I’ve decided I’m never going to buy a Blu Ray. I’m going to wait until the players are incredibly cheap, then Netflix them until they are completely replaced by digital content distribution.

Eli is going to Chicago this week (all week). If you know of anything he should make sure to visit, experience or a great place to take photos, feel free to post it in the comments. I’m sure he’ll appreciate it. Maybe some Chicago FB’s want to buy him a beer? 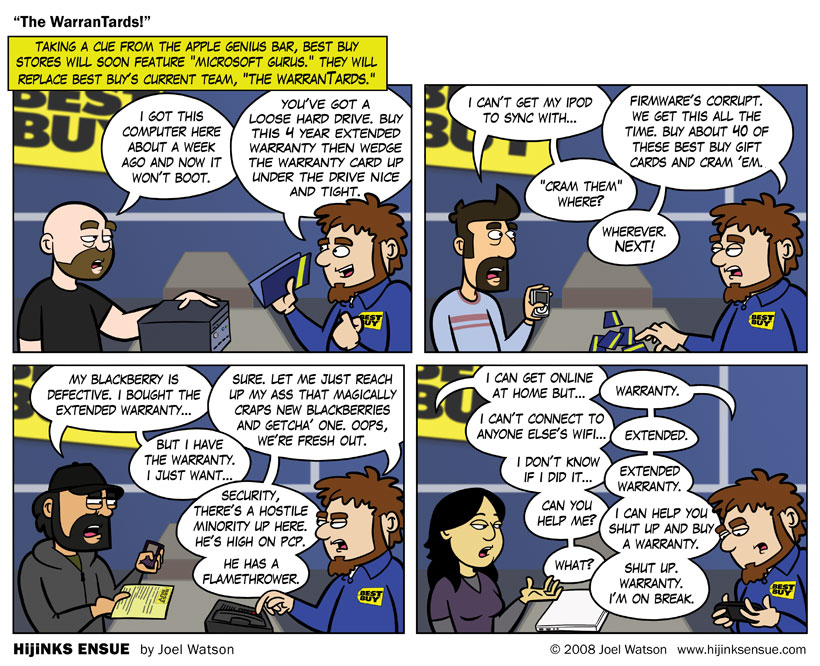 Microsoft once again has their alchemists hard at work trying to decipher the formula for “Apple Cool” and distill it into a easily replicable process. Let’s look at their last 3 “cool” efforts:

Windows “Mojave”: “Hey! Did you hear how shitty Vista was? You did? Well check this out! You like it? Oh really? THIS IS VISTA YOU IDIOT! HAHAHAHAHAHAHFUCKYOU!”

Now take out the part where they say “Vista.” That’s the campaign. They aren’t selling anything but confusion.

Microsoft Gurus: Well this hasn’t really started yet, but I assume it will go something like, “I want to buy a PC.” “Great! You know it has Windows Vista. Let me extoll the virtues of Vista to you… the Visturtues, if you will.” “Yeah, that’s cool… I’m going to buy a Mac. You guys sell those too right?”

Now, I realize this comic isn’t actually about MS Gurus, but it did give me an opportunity to show you Best Buy through my eyes. I went with Josh to buy a camera at Best Buy a while back and they were seriously trying to sell him a replacement plan that didn’t cover anything beyond the manufacturers warranty. When I pointed that out the WarranTard in question died a little inside and finished ringing us up.