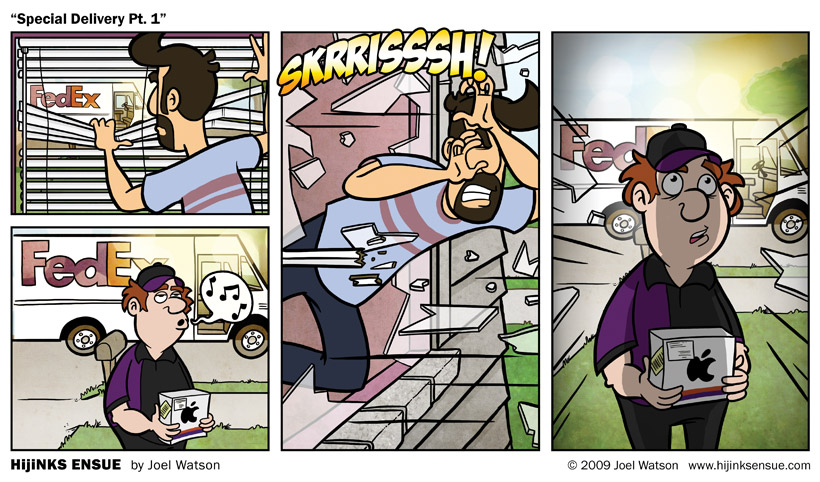 And so it goes. To update my previous tale of iPhone 3GS ordering woe, Apple actually cancelled one of my orders arbitrarily. I called AT&T since Apple blamed them for the cancellation and they said both Apple and AT-AT AT&T have been randomly cancelling orders with two phones for no reason and there was nothing they could do to fix it. I placed a new order in-store and they claim it will be here in 10 days. Unfortunately both mine and my wife’s old iPhones are alread on eBay destined for new homes. Oh well. There are much worse problems to have. I hear in some parts of the world people don’t even HAVE access to 3g cellular data networks… and also they’re starving.

Do you have a tale of waiting in line today? 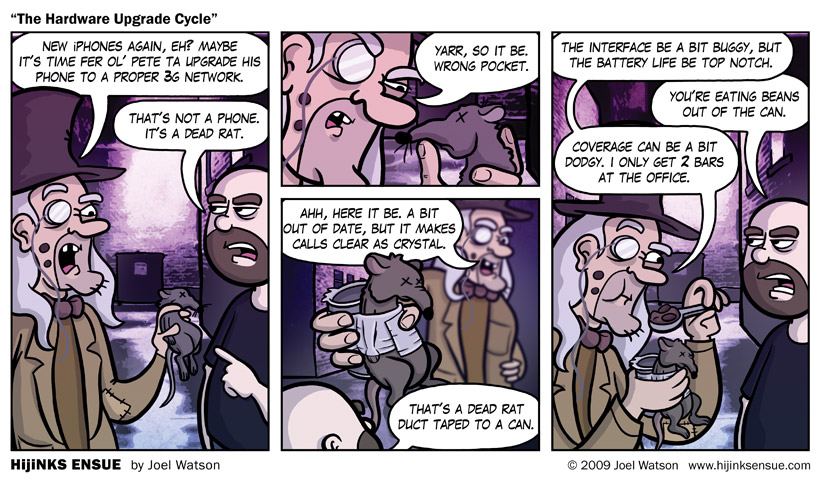 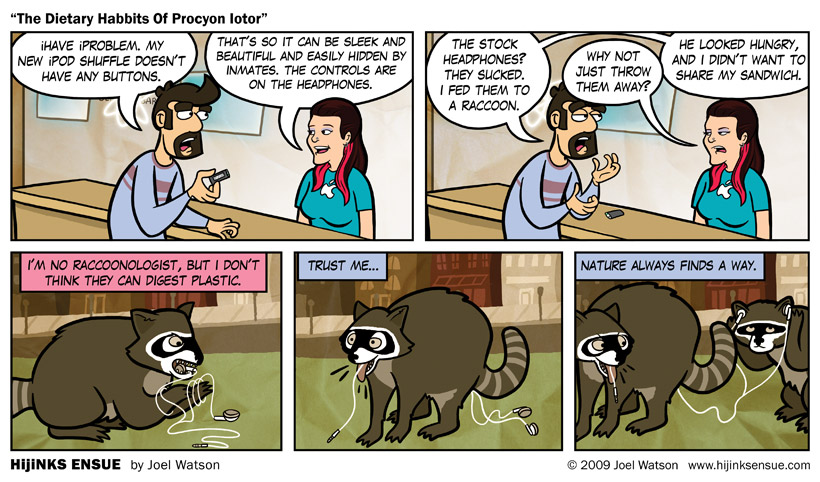 …Or the common North American Raccoon.

I have no idea why I did this comic, so don’t ask me. Raccoons and iPods? Whatever. The multi-hair-colored young lady in panels 1 and 2 is long time friend of HijiNKS Ensue, Stacy. She is soon to be an Apple Genius at our local Apple store but hasn’t yet completed the ritual blood rights or the “Sacred Hunt.” They send you out into the mall and if you don’t come back with the half eaten heart of a PC user you have to battle 7 food court employees including the manager of Sbarro. He’s enourmous and armed with a calzone. My only regret, art-wise, is that I wasn’t able to showcase all of her facial piercings in this limited pixel format. Sorry Stacy. I tried.

I don’t have a strong opinion about the new 3G iPod Shuffle or the feaux-controversey surrounding it’s total lack of buttons. If you like it, buy it. If you hate it, don’t. I do find it interesting, however, that every SNL sketch and Onion story that mocks Apples disdain for all things button seems to come true. Soon enough, purchasing an iPod will actually REMOVE buttons from your other devices. It will litterally have negative buttons. 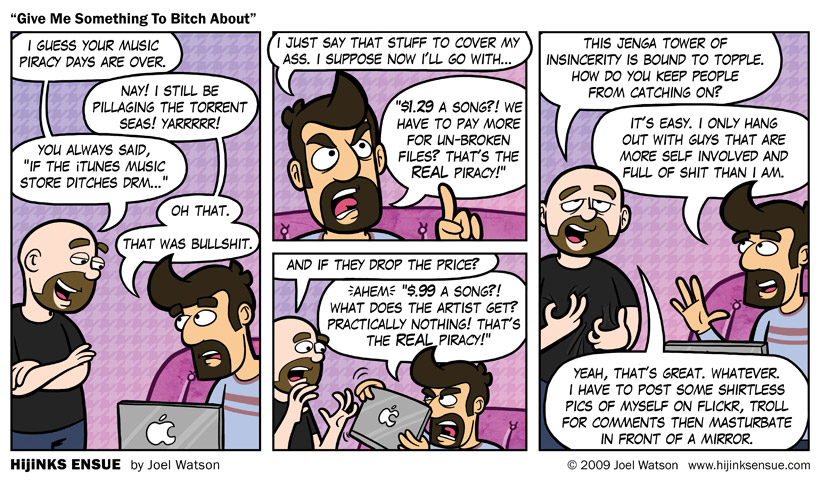 Sorry for the late comic. I was preparing for, then participating in an actual job interview for an actual job. The Experiment isn’t over, just evolving. More on that as things develop.

Re: The background of this comic – I asked Twitter what my background color scheme should be and Josh suggested (rather CHALLENGED) “dopefish3d @hijinksensue no no no, houndstooth, alternating between mauve and periwinkle.” Far be it form me to back down once the gauntlet has been thrown, so there you go. I don’t really like it, but I still win.

I’ve really been relying on the “I would totally buy form iTunes if not for all the DRM sadness” crutch for years. Now I have nothing to justify my thevery.

The iTunes Music Store is a brilliant piece of technology. I know people who aren’t normally susceptible to traditional ads and upsales that MARVEL at how ITMS gets them to fall for “you just bought this song… your playlist would be twice as awesome if you added these other 3 songs… i bet some hot chick would totally do you if you played those 4 songs for her and burned some incense and got all suave talkin’ with lotions and oils and shit… click here to buy some incense…” But is it really “getting you to fall for it” if it is actually helpful and you enjoy the shopping experience? Their marketing genius can’t be denied, but you are welcome to debate the true nature of their intent. Is Apple the next RIAA or are they the harbingers of fair and just digital distribution?

I don’t have these questions about Bit Torrent. It’s like paying cash for RAM in China Town. It’s cheaper than retail, comes in a paper sandwich bag that said “RAMS” in Sharpie marker, and I know before I buy that if anything goes wrong the people that provided the goods would sooner drug me and steal my organs than help me out. 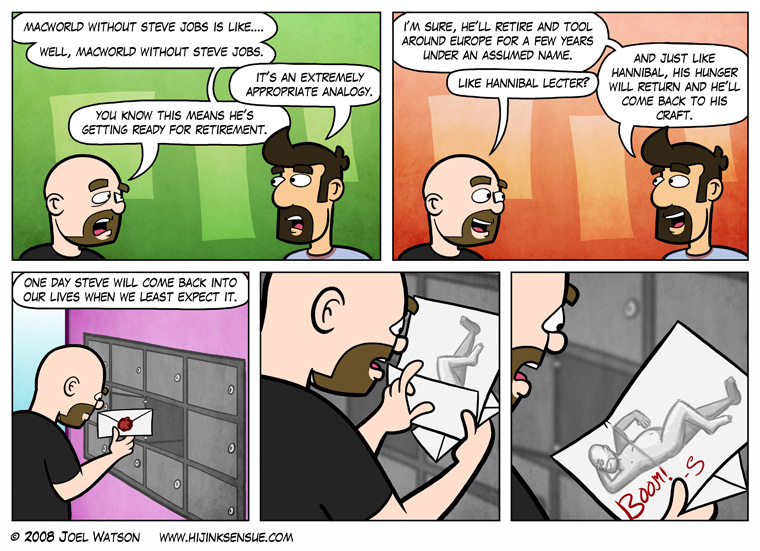